…for me in national forest. I was near water on some stretches of the trail.

It was nice to sleep in the deep woods again. 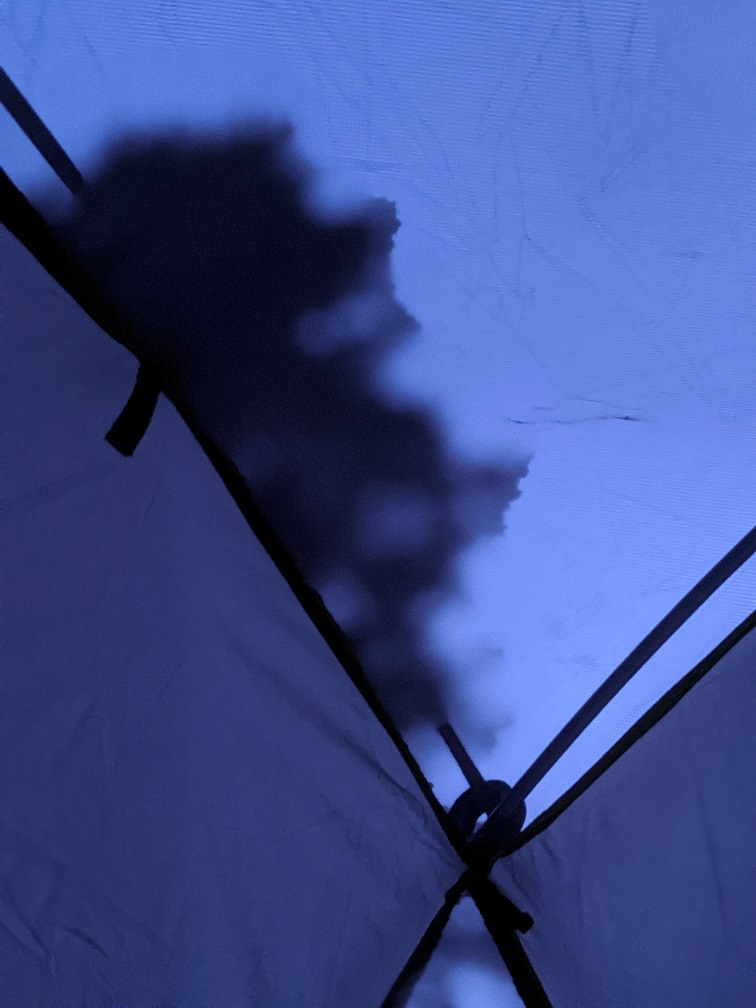 I awoke to temperatures in the high 30s F on this August morning at about 4500 ft., then warmed myself with a hot brew.

But the ongoing political unrest. I guess it’s just one part of the perfect storm underscoring the inevitability of universal basic income (UBI). The storm being the lack of jobs increased by the pandemic, swift rise in unemployment, and political unrest in which years of insufficient income and unaffordable housing and health care factor in. Many of the jobs existing pre-pandemic won’t return. Judging from my town, many people have recently joined the ranks of the homeless. Cars are now parked at homeless encampments, and I think some may have been parked in their lots and driveways not long ago. Blocks where there were sporadic tents near businesses now have shuttered storefronts with side walks lined with tents, in some parts of town. It’s not as hidden as it was, either because the pandemic is causing municipalities to stop scattering and pushing around the homeless, or shelters more easily reach capacity due to social distancing requirements. Many homeless are not what I call needy. I can’t call anyone needy who simply has the same needs as I have: access to food, water, shelter and a toilet and shower. To me a needy person is someone who’s after the unnecessary; like a bullying or controlling individual addicted to the control, an addict needing unnecessary chemicals, other excesses, etc.

But back to the political unrest, on the electoral level. It doesn’t take a lot of imagination to envision the worst case November scenario. We’ve got a president with a real estate development and entertainment background who wants a show, be it his reelection inauguration or a dramatic rejection of defeat. If he can’t have an inauguration, he’ll have a bigger show. Worst case, I’m imagining. If he holes up in the white house after his defeat, I can see white supremacist and other right wing militia trying to guard the white house. But retired military brass oppose his reelection. Powell has said the president’s “drifted from the constitution” (and Powell said he’s voting for the Democrat instead). Mattis is not voting Republican in November and has said the president is actively dividing the country, which smells slightly of succession. These are politically heavy endorsements of the Democrat. Retired military brass are likely in touch with current military brass. If the defeated president holes up in the white house guarded by right wing militia after the Democratic win, the USA military may very well shew away the militias and evict the squatting president to vacate the building for the president elect.

The president could lose in November. Prominent Republicans including the agriculture-tied Lincoln Project, and the retired military brass, have abandoned him and endorsed the Democrat. Libertarian-Republican Weld is now endorsing the Democrat. Evangelicals haven’t abandoned the president, yet. If the president loses the evangelicals, all he’ll have left is the white supremacists, which are too small a voting block for success. I’m sure I’m leaving out some voters.

The current chaos threatens domestic and world markets. The market will be protected, maintained, propped back up. UBI may play a role in the USA.

I admittedly think about in-town life when I’m in the deep woods.